With the biggest waves and storms hitting Europe at the moment, big wave surfers are traveling from around the world to tackle the swells. Nominations for the prestigious Billabong XXL Global Big Wave Awards are rolling in for the british surfers who are brave enough to take on Hercules.

Hundreds and hundreds of comments on the Daily Mail article debating the ethics surrounding a father risking his life for the thrilling ride of the biggest wave ever surfed. No wave has ever made such a splash with the public with the majority in awe of the monster wave and the plumber who rode it.

Potentially the biggest wave ever surfed and an incredible ride to watch. Its scary to imagine what will top this!

Lyndon and Jayce have been journeying through Europe hunting for good waves. Their Ripcurl  – Our Search, Episode 2 is out now. 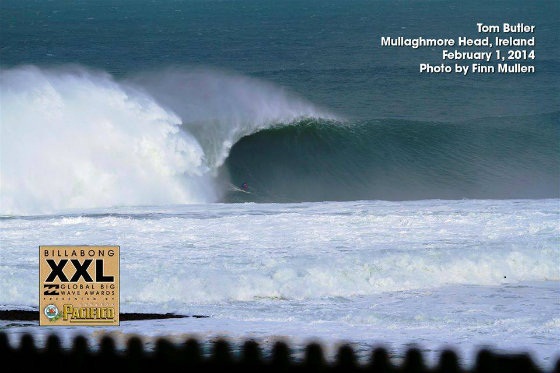 Tom’s immediate reaction after getting off the water “F#k just rode the biggest wave I ever have @ Mullaghmore, everyone was charging so perfect out there!!” left his facebook friends hungry for footage.

A calmer comment to his sponsor Osprey – “It was a gigantic barrel, and I was standing in the jaws of it, I ended riding over the lumps of the three different ledge-y parts of the reef and came out. The boys were screaming. I sensed then that it might have been a pretty special wave.”

As the videos and images were quickly thrown around the face book pages and twitter accounts more appreciation rolled in. In the words of XPYs Jack Clinton “SICKKKKKK!!!!!!! Can’t believe how hard Tom Butler is going, it’s really inspiring to watch him attack these kinds of waves. Pegasis power in full swing haha”