Andrew Cotton may have surfed the biggest wave ever and thrown big wave surfing further into the public eye. The Daily Mail, top story of the day and with hundreds of comments flooding in from Daily Mail readers the debate of responsibility is hotting up. 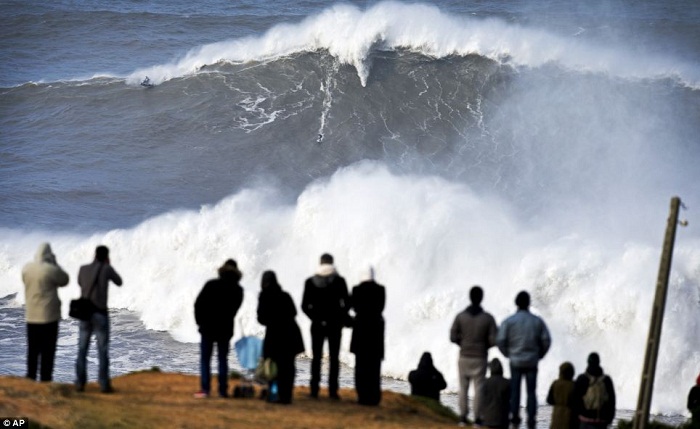 On one side are those who think he is irresponsible and selfish for endangering his life chasing the waves, with some interesting comments…

“So you think that it’s okay to tell us all that DRUGS are such a danger to our kids but that surfing 80ft waves is somehow FINE!? I think that anyone who read this article and found it impressive should have a good look at themselves and think that, in essence, it’s the same thing as just handing marijuana to a young child.” –  camphj, Oxford, United Kingdom

“Obviously breaking records means more to this man than his wife and children. And of course if he hadn’t made it, there would have been the hours and hours of search and rescue that he wouldn’t have been paying for. He really needs to get a grip and realise that life isn’t all about him and his selfish desires. There are people in his life who love and need him, far more than he loves or needs them.” – MedusaC, manchester, United Kingdom

Others see him as an inspiration, someone for his kids and most surfers out there to look up to, and most of all not someone who conforms to the responsible settling down that many think should go hand-in-hand with becoming a parent. Well, I for one would much rather have a Dad or husband who followed his dream and pushed the limits. Good on you Cotty!

“Those waves are like small mountains, he must be absolutely potty!!” – Resedit, Manchester, United Kingdom

“What a crying shame that people full of negativity feel the need to criticise Andrew Cotton for following his dream. Andrew Cotton trains rigorously for this sport. He is part of a team of big wave surfers who are all highly trained lifeguards and watermen. Man has pitted himself against the elements, the heights, the depths, space etc since time began. Of course risks are taken but they are usually calculated risks. This is not just a whim or flight of fancy but something at the very top of their game pushing the limits of what has previously been achievable. By all accounts he is a hard working, humble guy who is not used to the limelight. His achievements place British Surfing on the map, the publicity this region of Portugal receives is boosting their coastal community and no harm is done. In Portugal only the best are allowed to surf this wave, they require a license to do so, to show that they meet the safety requirements. Bravo Cotty and keep safe” – richclarkimages, Tunbridge Wells, United Kingdom,

A few months back, on the last big swell to his the Portuguese coast Andrew Cotton explained his surfing to the One Show –  so straight from the horses mouth – “dreams are possible”