Warning: Declaration of FDX_Widget_search::form() should be compatible with WP_Widget::form($instance) in /home/customer/www/blog.kingofwatersports.com/public_html/wp-content/plugins/wp-twitter/modules/class-p2.php on line 47
 » Hurley Pro 2013
Home
General

Hurley Pro kicks off this weekend!

SAN CLEMENTE, Calif. – Will 2013 be a 4th time charm for 11-time ASP world champ Kelly Slater, who has taken the Hurley Pro title for three years in a row? On September 15, the top 34 surfers on the WCT circuit, along with wild cards Mitch Crews and Dane Reynolds, will battle it out to take the title from the king of Trestles at San Onofre State Beach – Lower Trestles for the 2013 Hurley Pro.

As the only ASP World Tour event in North America, the 2013 Hurley Pro features some of the most talented surfers on the planet. Lined with cobblestones, San Onofre State Beach – Lower Trestles is California’s premier point/reef break and a world-class showcase for high-performance surfing. Located in between San Diego and Orange County, the Hurley Pro draws thousands of fans and legends, the young and the old, scions of industry and keen media members to cover every moment of action over the week-long waiting period.

All of the dramatic action will be captured through live webcasts, giving fans a birds-eye view of the competition, along with some exclusive behind-the-scenes moments through multiple camera angles and water cams. In addition, the Hurley Pro will again feature an official App for iPhone and iPad, bringing the live event to the palm of your hand.

“I’m continually blown away by what the world’s best surfers can do at this wave,” says Hurley Pro contest director Pat O’Connell. “We’ve truly reached a level where these guys can pull off what they dream up, and Lowers is the perfect venue to watch them realize these dreams.”

For the first time ever, Hurley is offering five spots in an Expression Session featuring Rob Machado and an empty Lowers lineup between the dates of Sept. 15-21. The spots will be decided through an online bidding process, beginning August 26, with the nod going to the five highest bidders. All proceeds from the online auction will go to the San Onofre Foundation, caretaker of the San Onofre/Trestles region. “I’m honored to be a part of this event and part of this historic expression session,” says iconic surfer Rob Machado. “The San Onofre Foundation has been instrumental in keeping Trestles pristine, and I can’t wait to high-five my fellow expression session surfers and help preserve one of the best waves in the world.” To place a bid to participate in the 2013 Hurley Pro Expression Session, please visit http://myab.co/events/7T/ or text the word “Hurley” to 52182. Bidding closesd on September 5, at midnight PCT. 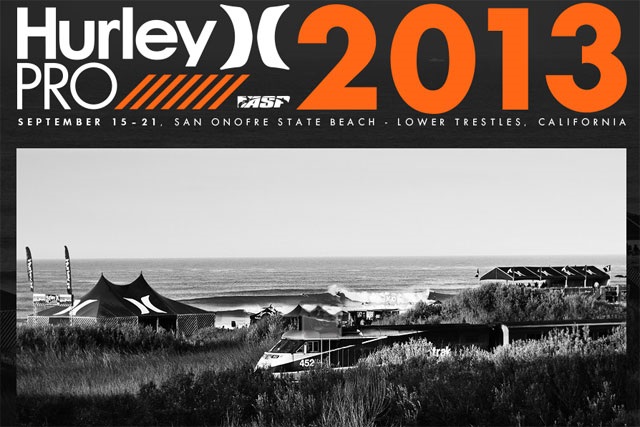 ABOUT SAN ONOFRE STATE
San Onofre State Beach is one of the true treasures in California State Parks, providing park visitors with a place for inspiration and the renewal of spirit with its breath-taking scenery and natural features. San Onofre is the fifth most visited State Park in California, with its rare 3,000-acre scenic coastal, canyon and foothills areas, all offering outstanding opportunities for recreation and a balanced approach to sound environmental stewardship. San Onofre State Beach also contains one of the last pristine watersheds in Southern California, which makes it well suited as a home to 10 threatened or endangered species of wildlife that are currently protected under federal law. The Surf Beach and Trestles areas of San Onofre State Beach are world renowned and historical surfing beaches, offering some of the most consistent surf on the west coast.

ABOUT HURLEY
Founded in 1999 with roots in Huntington Beach, Hurley is a surf lifestyle brand which designs, markets and distributes industry-leading apparel, footwear and accessories. Fueled by innovation, inclusion and empowerment of youth, Hurley is a wholly owned subsidiary of Nike Inc. with headquarters in Costa Mesa, CA and offices in Tokyo, Sydney, San Sebastian and Bali.