Hawaiian surfer Alessa Quizon, 19, has qualified for the 2014 Association of Surfing Professionals’ Women’s World Championship Tour. The Makaha resident will embark on next year’s elite international circuit in March alongside her close friends and fellow Billabong team riders, Laura Enever and Courtney Conlogue. 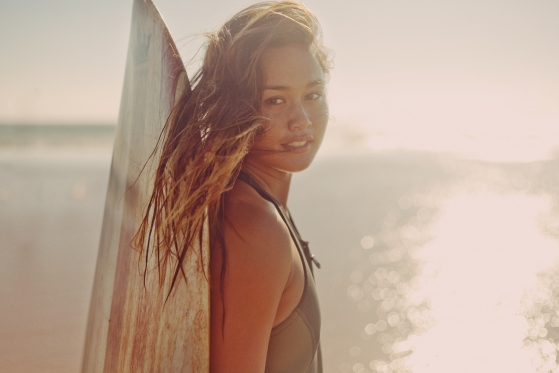 Quizon appeared to be on a fast track to qualification last year until an ankle injury suffered while preparing for a South American event set her back in the ratings. After a full recovery she has come back strong and will end the current year ranked fourth on the Women’s World Qualifying Series.

“It hasn’t really set in yet,” Quizon admitted of her achievement. “It’s been a dream to compete on the World Tour and I’m just so excited and nervous at the same time! I’ve worked really hard to finally get to where I want to be and it feels great.”

A coveted slot on the 2014 ASP World Tour will be a dream come true for this Westside shredder, who grew up scrambling around Oahu in search of waves and exposure. Quizon started off 2012 with a bang, including a win at the Billabong World Juniors at Burleigh Heads, followed up with a third place finish at the Billabong Pro Rio WCT event as a wildcard. While in Peru for a WQS event, she injured her ankle, derailing her season and shot at a swift qualification. 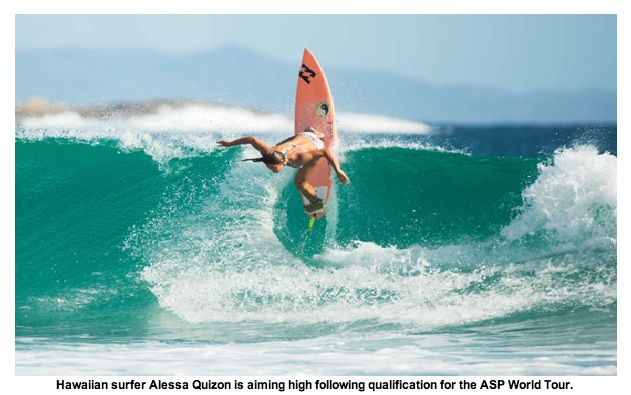 “When I sprained my ankle last year I was pretty much consumed in all of these negative thoughts that I put on myself,” Quizon said. “I wanted to qualify so bad and when I couldn’t even do a turn I felt defeated. It absolutely gave me the push that I needed. Sitting on the sidelines for two months without surfing made me realize that time is too precious to be injured and that you need to do things the right way to avoid making mistakes.”

After recovering, Alessa started 2013 strong and has been able to consistently string together results. Her most recent addition to the mantlepiece is a second place finish at the SuperGirl Pro event in Oceanside, California. Thanks to such consistency, Alessa has qualified for the big leagues and couldn’t be more stoked.

“I am so thankful for all the support that all my sponsors have giving me all these years,” Quizon remarked. “Billabong has been on my side since my little 12-year-old grom days. I am especially thankful for my mom and dad always pointing me in the right direction. I just want to make all my loved ones proud and accomplish my goal at winning a world title.”

Billabong Team Manager Megan Villa is impressed. “We are all incredibly proud of Alessa and her accomplishments and are excited to see what the next chapter in life holds for her,” Villa said.

Quizon will now focus on preparation for her 2014 campaign and for the upcoming North Shore season around her favorite Hawaiian breaks.

Check out this video of the girls surfing in Bali.