Warning: Declaration of FDX_Widget_search::form() should be compatible with WP_Widget::form($instance) in /home/customer/www/blog.kingofwatersports.com/public_html/wp-content/plugins/wp-twitter/modules/class-p2.php on line 47
 » Wildcard Weekend – The Air Tahiti Nui Billabong Trials for the Billabong Pro Tahiti 10th-12th August
Home
Surf 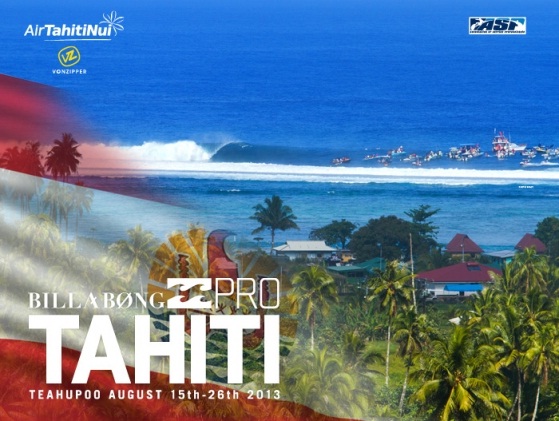 Leading the charge for the locals is Teahupo’o heavyweight, Manoa Drollet. The 35 year-old from Papara is a two-time trials winner (2005, 2007) and former main-event runner-up (2007). Thanks to countless big-wave performances at the fearsome location, he is considered a master of the break.

Drollet returns to competition following a long stint of rehabilitation for an injured leg. Now fighting fit, Drollet says he is ready to go and regardless of wave sizes, the Air Tahiti Nui trialists are guaranteed to put on a good show.

“It’s tough, everybody wants to surf Teahupo’o,” explains Drollet. “If it’s small, then there is more luck involved. If it’s big, then charging and commitment make the difference. Either way, it’s always interesting because there is so many good surfers hoping to do well each year.”

Brazilian Ricardo Dos Santos (BRA) heads the list of internationals invitees – the 23 year-old played the role of giant killer last year, becoming the first surfer to win the trials back-to-back. He then went on to eliminate Kelly Slater (Fl. USA) from Round 3 of the main event thanks to an incredible last-minute tube ride that had fans on the edge of their seats.

“I can take a lot of confidence knowing that I beat Kelly last year, he has the best competitive record of anyone in Tahiti. I’d love to win the whole event, but first things first, I need to do well in the trials,” said Dos Santos.
“It doesn’t matter if I have Kelly, or Parko (Joel Parkinson) or Manoa, my strategy will be the same – I’ll be chasing the biggest, deepest barrels I can find.”

Sunshine Coaster, Wade Goodall (Qld, AUS) was selected to participate, but had to withdraw after breaking his femur during a freak free-surfing accident in New South Wales, Australia a week ago.
The Air Tahiti Nui Billabong Trials is a tough draw. The eventual winners are pitted against the top seeds of the Billabong Pro main event.
Currently Mick Fanning (Gold Coast, Qld, AUS) leads the world ratings ahead of Kelly Slater (Florida, USA) and reigning world champion Joel Parkinson (Gold Coast, Qld AUS) sits in third.

The Air Tahiti Nui Billabong Trials window runs from August 10th – 12th, with just one day of competition required to find a winner.

GOOD LUCK TO ALL THE SURFERS COMPETING THIS WEEKEND!!