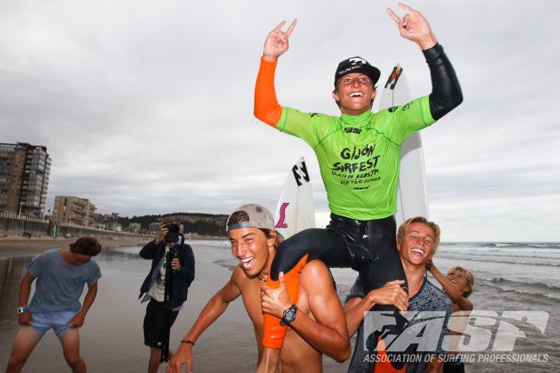 The 16-year-old Mignot’s victory was his first final win and followed a victory by his elder cousin Diego in the previous event the O’Neill Pro Junior at Sopelana. The French cousins, only a year in age apart, now occupy first and second on the European Pro Junior ranking’s. At the end of the six event series, the top four ranked surfers will travel to the ASP World Junior Championships to be held in Brazil at the end of the year.

“I’m so happy right now, it’s my second final and first big win!” Nomme Mignot said. “This victory is for my family, parents and brother and all the team at Billabong including Richard our coach and all the surfers! Diego won at Sopelana and now me, I’m just so stoked! I’m learning all the time and the hard work is paying off.”

“We have had an outstanding start to the junior series,” said Richard Marsh, Billabong Europe coach and trainer. At Sopelana we had three of our surfers in the final, which featured some of the best junior surfing I have witnessed. The team environment has been super positive and all the surfers have been focusing on being as prepared and as professional as they can be for each event. We have three surfers ranked in the top 6, the hard work is paying off and the boys have been tearing it apart.”

For Diego, the team spirit and hard work has been important and although second in the ranking’s he is not getting to far ahead of himself. “Maybe I’m one of the favourites now and people will want to see me lose (laughs), but it’s just about taking it event by event. The goal is just to keep working hard, have fun, qualify and represent France at the ASP World Juniors.”

“It’s epic to see Nomme and Diego’s results, we have a solid Junior Development program here in Europe.” said Sam Carrier, Billabong Europe Men’s Marketing Manager. “Nathan Hele, our European Team Manager, and Richard have been working hard with these groms leading up to the season and his work and the early results are a nice reward for Billabong’s ongoing commitment to our junior athletes.”

The Billabong junior team which also includes current #6 rated Ian Fontaine, exciting 15-year-old Gatien Delahaye, who made the semis in Gijon and Thomas Fernandes, are now staying, training and surfing together under the watchful eyes of Marsh in Hossegor. The preparations are underway for the final three events, starting with the Airwalk Lacanau Pro Junior that starts on August 9.

So a massive congratulations to Nomme Mignot and the Billabong team! Don’t forget to check out our current range of Billabong wetsuits, boardshorts and tail pads –  http://www.kingofwatersports.com/billabong-c256.html

We currently have a big sale on the website so grab yourselves a bargain this summer while stocks last!