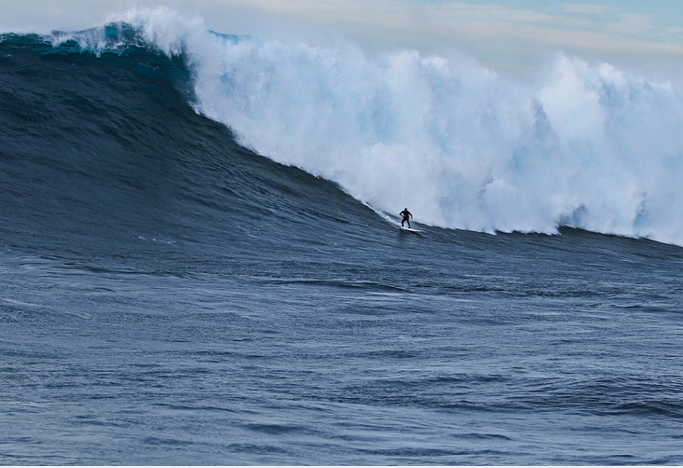 Ride of the Year runner-up, Shawn Dollar (Santa Cruz, CA, USA), had the honor of winning the XXL Biggest Wave Award, as well as the Pacifico Paddle Award for a Cortes Bank behemoth.

Dollar’s history-making wave was estimated by experts to be 61ft in height, a new paddle world record. Cortes Bank is the legendary seamount and mega-wave magnet located 100 miles southwest of Los Angeles. He had previously set the world paddle-in record of 57 feet at Maverick’s in Northern California in 2010, only to have Dorian snatch the spot in the record books in 2011 with a 58 footer at Jaws.

This is the first time in the event’s 13-year history that any waves caught by paddle power have been nominated in the XXL Biggest Wave division, until now that division had been only accessed by surfers using tow-in assists by personal watercraft.

“Is this really happening? Are we really paddling into waves bigger than what we used to tow?” exclaimed Dollar. “It’s surreal, it’s such an honor. This is what I’m passionate about, I’m as big a fan as anyone – to be the guy that set the record? Phenomenal. Stoked. Over the moon. 61ft? It’s hard to put numbers on those things, but it was the biggest wave I’ve ever seen in my life,” said Dollar.

“It’s seriously so heavy to go and do something that you might not come back from, but there’s a compulsion for me to go do it. I’m so glad I made that wave. When I first saw it, I was absolutely scared to death. I thought I was toasted, I thought it was going to break on my head … 100 miles out to sea … it was worst case scenario type stuff. But the thing backed off and I turned my board around and whipped it and I went from a situation where I thought I wasn’t going to make it, to a situation where I went ‘Fu#k! I just rode the wave of my life!’” explained Dollar.

Dollar dedicated his wave to fallen big wave surfer and friend, Sion Milosky, who drowned at Mavericks in March 2011.“Death and drowning are absolutely prevalent. I’ve seen people die out there with me. It’s the real deal out there. I’ve kissed the ground when I’ve come in,” said Dollar.

If you fancy getting your big boy boots on and taming some giants, check out the V1 series from Billabong, which has an inflatable air bladder to get you to the surface and out of danger! Check them out here