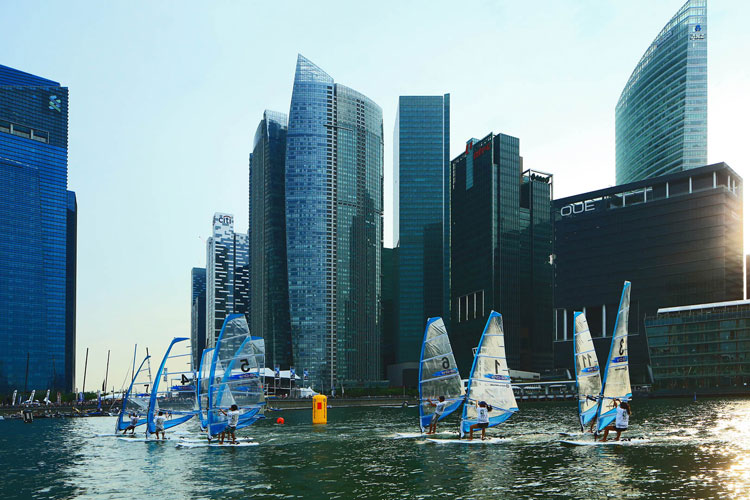 NeilPryde Racing Series global tour for 2013 has its first stopovers in Myanmar, Singapore, Qingdao and Pattaya. The series is unique in that it allows windsurfers of all levels, ages and ability to compete together on the same field on the ISAF windsurfing one-design class, the RS:One.

The Myanmar event started with the pre-Sea Games regatta – a big practice run for the 2013 Sea Games to be held in December at Ngwe Saung Beach. The RS:One Class represented the biggest fleet (27 racers) among other sailing classes such as the Optimist, 420 and lasers. Thailand, Myanmar, Singapore, Indonesia and Malaysia sent their best racers to battle in the rough Myanmar sea. Thailand was initially dominating but Myanamar’s young racers, who started windsurfing only eight months ago, delivered awesome performances and results.

The next two stops of the Series were Singapore and Qindao, the NeilPryde Racing Series warmed up the Extreme Sailing Series™ audience in the breathtaking race venues of Marina Bay in Singapore, right in the middle of the city, and in the impressive Qingdao Olympic venue and its nautical stadium.

Finally, the NeilPryde Racing Series joined the 2013 Top of the Gulf Regatta, for its second collaboration featuring an international fleet of 29 competitors from Thailand, Myanmar, Indonesia and India.

“Being part of the 2013 TOGR Regatta was a good opportunity for our junior sailors to participate in an international event at home, and to compete with the RS:One one-design ISAF Class. Our youth sailors enjoyed two wonderful days of racing giving them encouragement for the future”, – Prapart Sangngern, Windsurfing Association of Thailand (WATH) Youth Development Programme.

In June, the NeilPryde Racing Series will fly to Istanbul with the Extreme Sailing Series™ and to Dunkerque for its first 24 hour team relay format race course. This will lead the fleet into the RS:One European Championships to be held in Brest in the first week of July.

See the results of the competition here.

Keep up to date with results and videos on Neil Pryde’s website, and grab your Neil Pryde gear here.