NEWPORT BEACH, CA – (March 26, 2013) – The nominees have just been announced for the 2013 Billabong XXL Global Big Wave Awards presented by Pacifico, and it’s going to be another amazing year for surfing as the sport’s best continue to smash down the barriers of what was once thought possible. 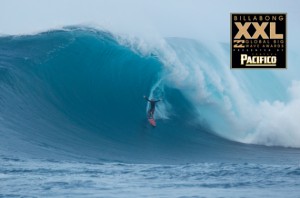 The Billabong XXL Awards competition window closed on March 20, the start of spring, with every wave ridden at every big wave break around the world in the previous 12 months in contention. The five biggest or best in each of the key categories have now been identified based on the photographic evidence, and the winners will be crowned at a gala awards show at the Grove Theater in Anaheim, California on May 3, with over $120,000 up for grabs across seven diverse event categories. (Four are announced today, leaving the wipeout and two performance categories to be announced in April.)

A truly global event, this year’s XXL entries included hundreds of images and video clips of scores of surfers in action in dozens of countries spanning all the world’s oceans. And while many up-and-coming surfers made their mark this year, when the vast number of entries were distilled down to the very best, there were a number of names left who are no strangers to the XXL winner’s podium.

In an unprecedented outcome, Hawaiian surfer Shane Dorian has been nominated in all four of the categories revealed today, including the Ride of the Year, Pacifico Paddle, Pacifico Tube, and XXL Biggest Wave for his landmark paddle-in tube ride on an enormous wave at Jaws, Maui during an extraordinary early-season swell which slammed the Hawaiian Chain in early October. 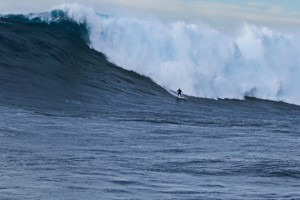 California’s Shawn Dollar is right on Dorian’s heels with a trio of nominations including the R.O.T.Y., Pacifico Paddle and XXL Biggest Wave for his own exceptionally tall wave caught during a perilous December session at the notorious Cortes Bank, located in the open ocean 100 miles offshore of the California coast. This is the first time in the event’s 13-year history that any waves caught by paddle power have been nominated in the XXL Biggest Wave division, until now that division had been only accessed by surfers using tow-in assists by personal watercraft.

Dorian and Dollar may be headed for a spectacular showdown in this year’s event as the Guinness World Record for the biggest paddle-in wave could be at risk. Amazingly, Dollar set the record of 57 feet at Maverick’s in Northern California in 2010, only to have Dorian snatch the spot in the record book the next year with a 58 footer at Jaws on Maui. There is speculation in the surf media that one or both could potentially exceed the existing mark.

And while size does matter, it is the ultimate level of performance that is rewarded in the Ride of the Year category that carries $50,000 for the winner and another $14,500 for the other place-getters and photographers. Most often, performance is equated with riding deep inside the curl of the wave and living to tell the tale, and this year that rings true. Also up for Ride of the Year honors are multi-time XXL champ Greg Long of San Clemente, California for a deep tube at Jaws, along with a pair of amazing waves at Cloudbreak, Fiji by a pair of amazing Hawaiian surfers, Reef McIntosh and Dave Wassel.

While those waves were ridden in warm tropical waters, some nominees were challenged in wild conditions in the chilled North Atlantic, including XXL Biggest Wave candidates by Brazilian Danilo Couto at Mullaghmore Head, Ireland, and rides at the newly-famous break of Praia do Norte, Nazaré, Portugal by Hawaiian Kealii Mamala and local Portuguese surfer Antonio Silva. Other Pacifico Paddle Award nominees include Hawaiians Makua Rothman and Matt Meola at Jaws, and Pacifico Tube contenders by Chilean Ramon Navarro in Fiji and Irish local Peter Conroy representing the Emerald Isle with an imposing barrel at Mullaghmore Head in County Sligo.

Brazil’s Danilo Couto on a rainy monster at Mullghmore Head, Ireland.
Photo by Laurent Pujol. Click the image to see all the XXL Biggest Wave Nominees.

Several judging panels will review the nominated rides and the winners will be revealed at the invitation-only Billabong XXL Big Wave Awards party at the Grove Theater in Anaheim, California on May 3, 2013. The show will be webcast that night on BillabongXXL.com, and will be broadcast as a one-hour program on ESPN2 on Sunday, June 9 at Noon PT.

The Billabong XXL Global Big Wave Awards are presented by Pacifico Beer. Pelican Products is the official provider of waterproof cases. Surfline.com is the exclusive surf forecast of the XXL. The event is sponsored by Surfing Magazine and Air Tahiti Nui airlines.

The nominees for 2013, in alphabetical order: