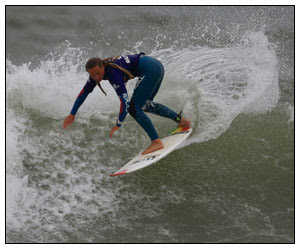 www.ukprosurf.com
The Rip Curl Girls Tour will this year feature a series of Women’s surfing contests in England and Wales. Three of these events; Bournemouth, Croyde and St Ives will combine to make a two star event on the Women’s UK Pro Surf Tour, with £1,000 prize money available. The surfer who accumulates the most points over these three competitions will win the only two star women’s event on the UK Pro Surf tour
In addition to the Pro events each venue will host a Newbie event. If the girls have not competed in a surf contest before they will have the opportunity to compete for the first time against surfers with the same experience as themselves. The finalists of these events will be put in the draw against the top Pro Surfers in the UK along with winning prizes from Rip Curl and the other sponsors.
The first event will take place at Bournemouth 28th June, at the location of the UK’s first artificial reef. There will be many activities taking place throughout the day to entertain the competitors. World Champion Stephanie Gilmore of Australia will be in attendance giving advice and supporting the development of the sport for Women.
The second stop on the Rip Curl Girls Tour will be Llanglennith on the Gower Peninsula, 23rd July. This event will not be part of the Pro Tour Series, due to the expected number of Newbie entries for the first timer’s competition. For the last 3 years over 200 female surfers have taken the opportunity to attend this event.
Stop three is at Croyde Beach, North Devon. Widely recognised as one of the best beach breaks in the country. It will give the best surfers a good opportunity to show their skills in quality surf.
The final stop is Porthmeor Beach in St Ives, situated below the Tate Gallery; Porthmeor is possibly one of the most popular beaches in Cornwall. In addition to the First time and Pro Event there will be a Women’s Longboard Event, the only Women’s Longboard event on the UK Pro Surf Tour. At this event we will crown the winner of the Rip Curl Girls Tour and give away £1,000 prize money.

http://www.kingofwatersports.com/ will again be providing the ‘King of the Wave’ award for the best wave of the contest
For further information please contact Dave Reed on 01637 854854 or dave@ukprosurf.com, also visit the website www.ukprosurf.com