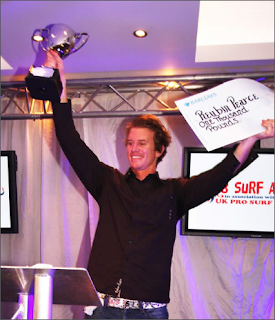 The British surfing community was out in force for the Surf Awards 2008 in association with the UK Pro Surf Tour held at the Esplanade Hotel, Newquay on Sunday the 16th of November.
The prestigious night brought together the cream of UK surfing and industry professionals in a celebration of the UK’s thriving surf scene and its outstanding individual achievements in 2008. The accolades consisted of awards based on the results of the 2008 UK Pro Surf Tour as well as brand sponsored awards for individual achievements in all areas of surfing which were decided by a panel of surfing and industry professionals.
South African Reubin Pearce took the ultimate title winning 2008 UK Pro Surf Tour in a dramatic day of surfing at the Animal Newquay Open. Reubin only had an outside chance of clinching the title going into the event; he needed Sam Lamiroy to be eliminated early and then had to reach the final, but must place himself ahead of Alan Stokes, all of which went to plan.
The Women’s tour was dominated and won by Irish surfer Nicole Morgan. Back from a year in Australia she only lost one event entered and that was to fellow Irish Surfer Easkey Britton. Tom Butler had a remarkable year, despite being over shadowed by Reubyn Ash and Jayce Robinson; he won the 2008 UK PST Pro Junior Title.
The Under 16 Boys division was very competitive throughout the year, however with great determination and incredible ability Toby Donachie took the title. Despite fantastic performances from many of the Under 16 Girls, Zoe Sheath from Isle of Wight dominated, not losing one heat all year to take the title. The future stars of surfing look to be coming from the youngest division. The Under 12 Open this year was very competitive.
Two surfers became the major challengers to the title, Dale Foster of Newquay and Ed Smith of Liskeard. They exchanged the lead several times through the course of the year with Dale eventually taking the title. The awards and winners were as follows…
2008 SURF AWARDS – IN ASSOCIATION WITH UK PRO SURF TOUR Sponsored awards:
1. Fat Face Most Improved Surfer 2008 – Winner: Reubyn Ash (Bude) This year has seen him make his mark on the worldwide surfing scene.
2. Saltrock Rookie of the Year 2008 – Winner: Jayce Robinson St Ives. The surfer with the best result in his first full year of doing the UKPST.
3. Spiezia Skin Care Most Inspirational Women’s Surfer 2008 – Winner: Gwen Spurlock (Swansea) This year has seen her bounce back from serious injury.
4. Relentless Money Move 2008 – Winner: Alan Stokes (Newquay) For his 10 point barrel ride in the Thurso event, Scotland.
5. Skinners Surfers Choice Award 2008 – Winner: Oli Adams (Newquay) Voted as their favourite surfer by the surfers themselves.
6. Christian Surfers Sportsman Award 2008 – Winner: Mark Vaughan (Lantwit) For his great attitude and sportsmanship during the tour.
7. King of Watersports.com King of Waves 2008 – Winner: Alan Stokes (Newquay) For his 10 point barrel ride in the Thurso event, Scotland. http://www.kingofwatersports.com/
8. The Animal Commitment Award.. – Winner: Mike Young (S Africa) For his commitment to surfingMedia Awards:
9. Wavelength Most Promising Junior 2008 – Winner: Tom Butler (Newquay) Over shadowed by Reubyn and Jayce but still winning the Pro Junior tour
10. Carve Aerialist 2008 – Winner: Reubyn Ash (Bude) For his progressive aerialist skills.
11. Surf Girl Most Up and Coming Female Surfer 2008 – Winner: Zoe Sheath (Isle of Wight) – Who did not loose a heat in the U16 Girls division all year
12. A1surf – Most Inspirational Surfer 2008 – Winner: Russell Winter (Newquay) – An Inspiration to all surfers in the UK and overseas
13. Pit Pilot Underdog award. – Winner: Richard Dodd (S Africa) – Consistant performance throughout the year, never giving up.
14. Newquay Airport Best Brit surfing internationally – Winner: Reubyn Ash (Bude) – Competing against Kelly Slater in the event he won his ninth world title and great performances on the ASP Pro Junior Tour.UKPSA awards:
15. UKPSA Best Surf Judge 2008 – Winner: Tony Good (Newquay)
16. UKPSA Services to the Sport of Surfing 2008 Winner: Nigel Semmens (Newquay) – A surfer who has competed at all levels throughout his career, winning all amateur titles including European title in the 80’s. Now helps many surfers by sponsoring, providing surfboards and encouraging up and coming surfers.
UK PST 2008 Champions.
U12 Open: Dale Foster – (Newquay)
U16 Girls: Zoe Sheath. (Isle of White)
U16 Boys: Toby Donachie (St Merryn)Longboard: Ben Skinner (St Agnes)Pro Junior: Tom Butler (Newquay)Women’s: Nicole Morgan (Ireland)Open: Reubin Pearce (S Africa)
The event organisers, Evo Management did a great job of making sure the night ran smoothly with impressive staging, lighting and sound creating an electric atmosphere. Martin Peirce from Evo Management (UK) Ltd commented ‘We are proud to be involved in such a prestigious and important event on the surfing calendar and we would like to thank all the sponsors for their commitment and support in making this unique event such a success’.