Warning: Declaration of FDX_Widget_search::form() should be compatible with WP_Widget::form($instance) in /home/customer/www/blog.kingofwatersports.com/public_html/wp-content/plugins/wp-twitter/modules/class-p2.php on line 47
 » Rip Curl H-Bomb Wetsuit
Home
Wetsuits 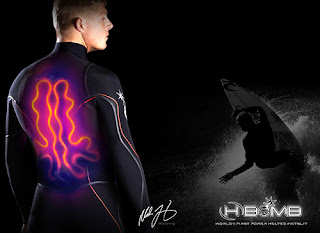 The concept that has inspired the imaginations of surfers worldwide is set to become reality November 1. The highly anticipated H-Bomb – the World’s first power-heated wetsuit – has gone through years of rigorous tests and trials, equating to the most technologically advanced wetsuit the world has ever seen.
“We wanted to challenge the existing concept of the wetsuit and look at new technologies that could take wetsuits to the next level,” said Michael Ray, Rip Curl Wetsuit Product Chairman. “The Rip Curl H-Bomb is designed to keep surfers warm in extreme cold water locations where thick layers of neoprene do not always offer enough warmth or are so thick they inhibit the performance of the wearer.”
The Rip Curl H-Bomb grasped the attention of the world nearly 2 years ago after the first research and development trip showcased current ASP North American Pro Jr. Champion, Adam Wickwire, punting backside air reverses in the freezing conditions of the Arctic Circle with ease. Since then, the ~Rip Curl H-Bomb has taken long strides in development, and its top level of quality and durability have met every standard of our wetsuit development team.
The power-heated Rip Curl H Bomb will change wetsuit technology forever, able to keep surfers warm through heating elements that line the back of the wetsuit. The heating elements, comprised of carbon fiber coils, are powered by two lithium Ion batteries and are strategically placed to warm the surfer?s core, which in turn filters warmth to the extremities.
If the traditional way of warming up while wearing a wetsuit doesn’t appeal to you then you’ll definitely like the new H-Bomb wetsuits from Rip Curl. They feature a non-metallic carbon-fiber heating element built into the back of the suit that’s coupled with a high-stretch titanium lining that reflects the heat from the elements onto your body. The heating element is powered by 2 lithium ion batteries that weight about 120 grams and are carried in the lower back. The batteries take about 3 hours to recharge and provide about 1-1/2 to 2-1/2 hours of heating depending on the intensity level you use.
All of the electronics were co-developed with a waterproof camera housing manufacturer to ensure they could handle any conditions, and in the worst case scenario the batteries aren’t strong enough to deliver a charge that would present any danger to a healthy person. The suit also features a waterproof power and settings switch on the outside which allows the wearer to adjust the intensity of the heating element whenever they want
“The H-Bomb has been tested everywhere from the icy waters of Norway and Iceland to the shark infested waters of South Africa,” Ray also stated. “It has the potential to change surfing and ocean exploration forever, allowing cold-water enthusiasts to voyage and enjoy places that were considered too extreme before. Rip Curl’s H-Bomb is the future of cold water surfing.”
http://www.kingofwatersports.com/