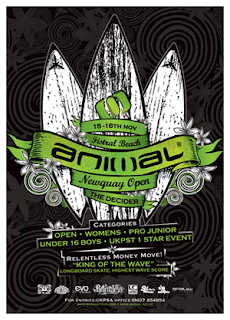 Animal Newquay Open is the UKPST title decider.The heat is on for the Animal Newquay Open which is set to crown the 2008 UK Pro Surf Tour champions at Fistral on the 15th and 16th of November.The event will be the 9th and final event on the UK Pro Surf Tour 2008 and it looks set to be a tense title decider with just a few points standing between current tour leaders Sam Lamiroy and Animal rider Alan Stokes. Both Sam, the defending UKPST champion, and Animal rider Alan have had a great year on the 2008 tour leaving it right up until the last event to decide who will take the title making it one of the closest tour results ever. The 1 star event supported by Animal will consist of Men’s Open, Women’s Open, Pro Junior and Under 16 Boys divisions with a prize purse of £2750. Dave Reed, Director UK PSA comments, “It is fitting that the last event will decide the outcome of this year’s tour.
The two main challengers are Sam and Alan, who have both won the tour title in the past. However there are two other surfers that have a chance; Reubyn Ash from Bude and South African Ruebin Pearce”. Adding “again the level of surfing on the tour has been exceptional, surfers have had to compete in extreme and diverse conditions, who ever wins this years title will deserve it”The weekend will also see the 2008 Surf Awards being held at the Esplanade Hotel at South Fistral on Sunday the 16th of November to celebrate this year’s achievements in surfing and to officially crown the 2008 tour champion. Tickets for the Surf Awards are available now through the UKPST office
www.kingofwatersports.com