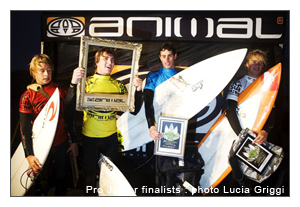 Day 1 of Animal Newquay Open scores clean conditionsDay one of the Animal Newquay Open at Fistral Beach began with some of the best conditions seen at this event in recent years. The final round of the UK Pro Surf Tour started with the Under 16 Boys and Pro Junior heats in 3-4ft onshore waves. The wind may have been onshore but the clean faces to the waves allowed the surfers to perform some big radical turns.
Toby Donachie from St Merryn surfed consistently well throughout, electing to surf all three possible categories, Under 16, Pro Junior and Open divisions. In doing so he progressed to both the Under 16 and Pro Junior finals. Other surfers that selected to surf multiple categories were Tom Butler (Newquay), Reubyn Ash (Bude) and Jayce Robinson (St Ives), who each surfed the Pro Junior and Open categories. All three made the final of the Pro Junior division along with Toby.
Eventual champion in the Pro Junior was Reubyn Ash, with the highest individual score and combined score for his best two waves, totalling 9.33 and 17.5 respectively. Second place went to Tom Butler with Jayce Robinson in third and Toby Donachie in fourth. Reubyn commented, “This is my last year in the pro junior division so I was really pleased to win the final event. I really enjoyed it and had some great waves.”
In the under 16 final along with Toby was Alex Baker, Tom Good and Leon Mansfield. All surfers put on an exceptional display of surfing but eventually taking the title was Alex Baker from Croyde, followed by Toby in second, Leon from Newquay in third and Tom, also from Newquay in fourth.
Alex said, “It was a good contest, at least there were some decent waves for it. I didn’t feel like I surfed that well during the event but then I seemed to find my feet and got the waves that counted. It’s a great way to end my season!” The first round of the Open division saw all the expected seeded surfers progress. Stand outs included past WCT surfer Russell Winter, Nathan Phillips from Llantwit and past world junior champion Jye Gofton from Australia.
Tomorrow is looking to be an epic day with the wind dropping and the main title challengers taking to the water including Animal pro surfer Alan Stokes and tour leader Sam Lamiroy
Results
Pro Junior
1st Reubyn Ash
2nd Tom Butler
3rd Jacye Robinson
4th Toby Donachie