Warning: Declaration of FDX_Widget_search::form() should be compatible with WP_Widget::form($instance) in /home/customer/www/blog.kingofwatersports.com/public_html/wp-content/plugins/wp-twitter/modules/class-p2.php on line 47
 » Sam Lamiroy wins the Quiksilver North East Open
Home
General 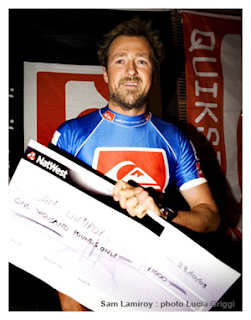 http://www.kingofwatersports.com/sam-lamiroy-victorious-at-the-quiksilver-north-east-open-i2554.html
Stop No 6 – 8 of 9 on 2008 UK PSTGills, Point of Ness, Kiess & Sandside25 – 26 October 2008Sam Lamiroy wins the Quiksilver North East OpenGale force winds, snow and below-zero temperatures made this event perhaps one of the most hard core professional surfing events ever! The North East Open is part of the Quiksilver and Roxy 3 Degrees Series. The event organised as part of the UK Pro surfing Tour was due to run in Tynemouth.In search of the best available conditions, the surfers and organisers drove just about as far North and as about far East as you can go in mainland UK. This morning the event ran just south of John ‘o’ Groats at Keiss beach. Conditions were harsh at best and horrific at times. In between hail and snow squalls small clean waves were found and the surfers dived in regardless.As the day progressed, better waves were reported at Sandside beach, so the surfers drove on in search of optimum conditions in
which to surf their event.
This time to a beach that is in fact located in the shadow of the Dounreay Nuclear Facility.A great left hand break allowed the surfers to show off their best manoeuvres to the judges. No spectators unrelated to the surfers braved the elements! Except for perhaps the odd seal, few people would have known that the best surfers in the UK were fighting it out for the £2000 prize and vital points up for grabs as part of the UK Pro Surfing Tour.
Eventual winner, Sam Lamiroy took the title and beat the other finalists in what was to be a tough day in the office. The winner’s cheque and the points will always make a bad day good. Runner up in second place was Quiksilver Welshman Nathan Phillips, and not quite finding the required waves despite earlier great performances were Warren Tuck from South Africa in third and his countryman Mike Young in Fourth.
The King of Water Sports www.kingofwatersports.com award for the highest wave score was awarded to the Australian Jye Goffton for a 9.77 ride. Britain’s best male and female surfers remain in the far North of Scotland to compete again in the Quiksilver and Roxy Scottish Challenge. The tour will then be moving onto Northern Ireland for the Quiksilver and Roxy Portrush Open.
Despite the wind and the harsh elements the surfers and organisers will be ready in the spirit of adventure to face the conditions again for the upcoming contests. Next year the events could be more aptly renamed, The Quiksilver and Roxy ‘minus’ three degrees series. One thing is for sure; surfing in the snow definitely pushes the limits of professional surfing!
Results:1st place – Sam Lamiroy
2nd place – Nathan Phillips
3rd place – Warren Tuck
4th place – Mike Young