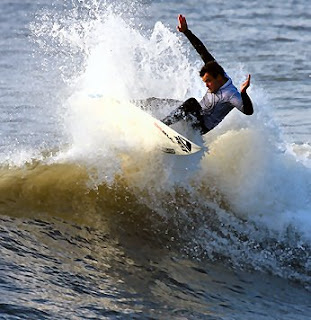 Russell Winter wins 2008 Elusive Welsh Open in one of the best finals the UK Pro Surf Tour has had too date. The surf, the weather and the performances all came together for a spectacular finally to the weekend’s entertainment.
The old guard of Spencer Hargraves (Newquay) and Russell Winter (Newquay), who both individually have won pretty much every title in the UK and Europe, went up against the new up and coming surfers Matt Capel (S Devon) and Reubyn Ash (Bude). This provided an explosive final with spectacular surfing from all finalists, which included the two highest scoring waves of the event, for Russell Winter 9.83 and Reubyn Ash 9.00. The eventual final placing was first Russell Winter, second Reubyn Ash, third Matt Capel and fourth Spencer Hargraves.
In the Women’s division it was incredibly close throughout the final. But eventually Kathleen Spears (Croyde) managed to pick up the best wave of the heat in the dying seconds to score 7.0 and take the win. Second place went to English Women’s Champion Holly Donnelly (Newquay), Third to Australian Raine Jackson and fourth Bournemouth Surfer Jenny Horbas.
The Pro Junior with a record entry showed how much talent is beginning to emerge in British surfing. An in-form Josh Piper (Newquay) narrowly defeated a charging Reubyn Ash, third place went to Jayce Robinson (St Ives) and fourth Lyndon Wake (Croyde).
Relentless provided a Money Manouvre Award of £250 for the best Cutback at the event, which was held by many of the surfers as the contest progressed, but eventually was claimed by finalist and new ratings leader Matt Capel in his semi final heat.
http://www.kingofwatersports.com/ provided a ‘King of the Wave’ prize, a top of the range Sector 8 Skateboard to the surfers, male and female who scored the highest scoring waves throughout the contest. The Women’s Award went to Kathleen Spears, who in her semi final heat scored a 9.07 out of a possible 10 points. The Men’s to eventual Contest winner Russell Winter, who in the final scored 9.83, which included a 10 point scores from two of the judges and a 9.5 from the third.
Russell commented after the event “It has been a while since I have been in Wales and have enjoyed coming back. I surfed against some of the best surfers in the country, many of whom are friends, in good surf conditions, in a great event. I would like to thank the sponsors Elusive and all the other sponsors and people who help make this event happen”.
Other thanks need to go to: the Atlantic Hotel who put on an amazing party on Saturday night. All the companies including Indoboard, who contributed prizes to raise money for Christian Surfers and Surf Relief charities. Surfboard tracker, The Welsh Surfing Federation, Evo Management and Bridgend Council without their help the event would not take place. http://www.kingofwatersports.com/