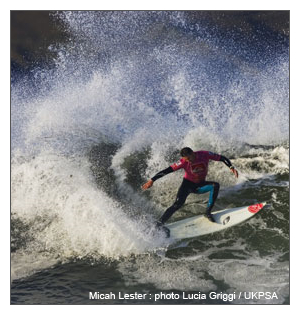 Stop No 7 of 9 on 2008
UK PSTThurso East Scotland
29 October 2008
Quiksilver / Roxy 3 Degrees score 6-8ft perfect Thurso East
After a great day of surfing in solid North Shore conditions, the Scottish Open yet again provided the goods. With a swell of 6ft plus, the legendary break of Thurso East came alive, allowing the best of British surfers to shine in world class waves in the shadow of an ancient castle.
http://www.kingofwatersports.com/quiksilverroxy-3-degrees-nab-6-8ft-perfect-thurso-east-i2563.html
In a tough final, fantastic waves were traded and only a few points split the positions throughout as the four surfers turned up the heat in the icy water. Reubin Pierce made the most of an exchange of waves in the dying seconds to take second place. Despite a slow start Reubyn Ash landed a huge floater on his final wave to propel himself into third place.
Spencer Hargraves made the most of the conditions with his strong surfing and dominated the middle part of the final but couldn’t match the high scores of 16.93 that gave first place to Micah Lester. Micah scored a 9.1 on his opening wave with a barrel and huge carving hack, leaving him looking for a back up wave that eventually came to him to seal the deserved victory.
‘For me I couldn’t ask for a better wave for this event. It is the best right-hander in the country and maybe in Europe and suits me to a tee. It is my favourite wave in Europe and this is the highlight of my year. Yesterday was the hell road trip and then today was pumping. It’s great,’ said Micah after the prize presentation. Quiksilver Team Captain Spencer got barrelled for most of the day and enjoyed the solid conditions and scored an 8.7 for his carve and barrel ride in the final. Earning a perfect ten-point ride earlier in his quarterfinal with a late take-off barrel, Alan Stokes won both the King of the Waves award for the individual highest wave score and the Relentless Money move award. 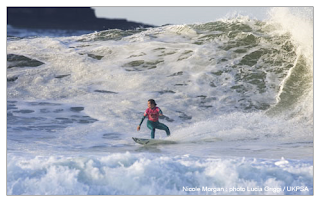 The Roxy event also ran and the ladies were out in solid reef break conditions. Surfing in cold water and over shallow rocks didn’t faze them at all. Nicole Morgan, Shauna Ward, Caroline Perret, Jo Dennison and Raine Jackson put on a great display, showing the crowds that the girls don’t mind the big surf at all.
Jo Dennison came second in the thrilling final with Nicole Morgan stealing the wave she needed at the end to push Shauna Ward into third place and to take the victory.
Nicole thanked Roxy and the UK Pro Surf Tour for arranging such a great event for the girls to showcase their talents in fantastic waves. Shauna Ward won the Queen of the Waves award scoring a 7.63, which was the highest individual score of the final.
The day didn’t start out quite like it ended. Rain, hail and strong winds greeted the surfers at the 8am start time. As the day progressed however the 8 ft messy waves improved as the wind turned offshore and the sun (yes sun!) shone through the clouds to provide a fantastic end to proceedings.
The conditions were well earned after some tough days of driving around England and Scotland in search of the best available waves in between snow and gales in order to complete the North East Open.
The surfers continue on to the third event of the Quiksilver and Roxy 3 Degrees Series, which is organised and run by the UK Pro Surf Tour. The entire team of surfers, organisers and supporters will be back on the road again tomorrow, with the next destination being Portrush in Northern Ireland for what will undoubtedly be another display of impressive surfing Many thanks must go to: Christian Surfers for providing refreshments throughout the event, Relentless for energy drink to keep everyone going and Evo Management for event structure.